Drandersongolfsecrets is the Nom de guerre of a friend, cultural critic, world traveller, and fellow Adventurer. He is the bulwark against the insidious comfort of cultural complacency that can creep into our lives. Through the mirror of his pen, he gives us a raw, unfiltered look at our own flaws and foibles. This is the first of a series of critiques he’s submitting to YusefWateef.com

I have to confess; at one time, I was a Radicalized Muslim, until I changed my life for the better.  The recent events in Boston and the subsequent, on-going rumblings of the FBI as well as the Americans’ confusion on Islam makes me chuckle and feel sad at the same time.

The Boston bombings are a terrible situation that exposed a lot of weaknesses in America’s War On Terrorism.

Inadequate, weak racial profiling combined with the FBI’s failure to listen to our allies the Saudi’s that warned us, in writing about Tamerlan Tsarnaev, one of the Boston Bombers. The public takes its cues on how to identify danger from our government; this directly resulted in innocent Muslims and people who identified as Arab being assaulted and violated.

The aforementioned are all serious topics worthy of discussion.  Has anyone noticed that so-called “Radical Islam” has achieved what America hasn’t quite achieved? Radical Islam has achieved complete racial diversity.  The majority of Americans are ignorant to the “Ummah” (community) of Islam.  Americans do not realize that the planet earth is 196,940,000 square miles and that there are over 1 billion Muslims, that 1 billion is composed of every race, size and color you could imagine.  Yes, there are Caucasian Muslims, just like Tamerlan Tsarnaev, thousands of them, who have a wide range of beliefs and practices.

The TSA is busy double-checking Sikhs and mistaking Orthodox Jews for Muslims while the Mujahideen (a term that Muslims use to describe those they see as Muslims who struggle in the path of Allah.) are busy exposing America’s propensity towards racism in any type of so-called terrorist event. The depressing part is that the Boston bombing showed not only our lack of intelligence about sleeper cells and Jihad imitators, but it also exposed our weakness in forming a truly diverse multi-racial America that will aid us in combating this invisible foe called “Radical Islam”.  The Mujahideen have used propaganda in saying America is a racist, xenophobic country that has affected Muslim lands throughout the world. The reactions and comments that I saw and read after the bombing only confirmed to the mixed up young idealistic Mujahid that there is no hope other than to kill or bomb random people. 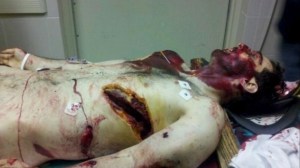 Tamerlan Tsarnaev in the morgue, after his final confrontation with the police. This photo was leaked from an unknown source but has been confirmed as an actual photo of his body.

At one time, my name was Abdul Aziz Muhammad. I was caught up in a world of irrational hate, paranoia, and simply unrealistic thinking, I was a big mouth kid who thought “Radical Islam” represented the racial paradise that I so desperately wanted America to be.  In short, “Radical Islam” has overcome the diversity problem. When will America overcome theirs?

God Bless us and may the victims of this false premised war, on both sides of the equation, truly west in peace.