These are pictures from my time in Pamplona, Spain. I was there for the festival of San Fermin.  You might know it as “The Running of the Bulls”!  People from around the world gather to honor the Martyrdom of St. San Fermin who, as legend has it, was dragged through the streets of Pamplona by bulls.

The event was a family friendly celebration. I think the localkids were too smart to want to run with the bulls anyway, even if it was allowed.

The largest batch of pailla I’ve ever seen!

(I need help captioning this)

I miss that hat! My friend with the red scarf is Merryn. She’s gone on to found a world-class design and marketing firm, http://fishtankcreative.com.au

This was the most sane person I travelled with…

A romantic view of the village I camped near. El Molino. I think. We went during siesta to visit. 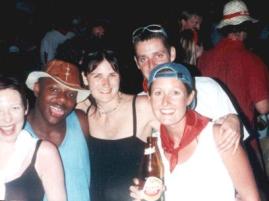 During the party, I was pelted with eggs, flour, & powdered cocoa.  You aren’t really in the groove until you smell like someone dumped cake batter on you.  Still, relief was in sight.  I followed the crowds under people’s windows and chanted “AAAAAA-GUAAAA, AAAAA-GUAAAA.”   They dumped buckets of water on our heads!

I was acutely aware that men routinely die doing the running of the bulls.  That’s why we did it. Before (or After) visiting Pamplona, I lived on the side of a mountain in San Sebastian, Basque country in a tent for an entire month.  Officially, it’s called Donostia-San Sebastián. I only socialized with a few people, and I had just one visitor. It’s the only part of my time in Spain that I didn’t take pictures.    It was one of the few times I made it a  point to enjoy the quiet.  I had a few good books and nothing but time.  Living in the moment and living for the moment are two very different but invaluable experiences.

Once the first rocket sounded, I noticed that very few people took off running.  I settled on a light jog.  Someone yelled, “Don’t run ’til you see the bulls!”  I took stock of my lack of common sense manhood and decided to wait.  Then, I felt the ground shake.  I had no idea what fear really was until I felt the cobblestone streets behind me tremble as six, 1,400 lb. bulls came charging down the road, all focused on me!  I saw the fear hit one man like a baseball bat to the knees.  He wobbled and lost his nerve.  His eyes darted to a wooden outcropping on the side if the racetrack.  He ran to it and jumped up, scrambling to climb the large wooden divider designed to keep the onlookers safe from the bulls.  He was unceremoniously kicked in the face until he let go and fell back onto the street.  We’d been warned before.  One the race starts there are only two ways out, the end of the race or on in an ambulance. When I caught my first glimpse of what those bulls looked like, I channeled the spirit of Jesse Owens and ran for my life!  I stumbled once, rolled, and got up.  During my roll, I caught a glimpse of someone trying to jump out of the way of a bull making a turn, he got caught on the inside of the turn and I saw his kneecaps get obliterated, turned into a fine red mist under the weight of the bull that slammed into him sideways.

I remember talking with a man at the start of the run waiting for the first rocket to launch.  The crafty veteran of several “Runs” standing next to me leaned over and told me that it was best to have a first and second rocket close together, it meant that the bulls were running in a tight pack.  It’s easier to dodge a group of bulls than several individuals running in random directions.  While he was talking to me, there was an announcement going over the loudspeakers.  The same message repeated in at least dozen languages: “If you are afraid, old, sick, or unsure of your ability to complete the run, PLEASE step out of the race now!  You will not be allowed to leave the track once the bulls are released!”  It was during one of the translations, it may have been French or German, I can’t be sure, when the crafty veteran that had tutored me on how to not get myself killed during the run, looked at me and smiled.  He said, “You know what, I think I’ve just found my replacement.  I’d rather figure out I was too old one race early instead of one race too late.”  He shook my hand and stepped out of the race.  I hope I’m as smart as he is when my time to step out of danger comes.

I doubt it, but I can hope.