The inner edge of my anus felt like someone had taken a few chips of burning hot coal and laid them there in a small pile.

That’s what was on my pucker.

Not the big, orange coals that impatient cooks use to sacrifice quality steaks to the obscene gods who demanded their food well-done. I mean chips of the white/gray hot coals that deliver a smooth, even, agonizing heat.

It hurt so bad that my teeth itched and my mouth kept making extra spit that was thick and heavy with mucous. 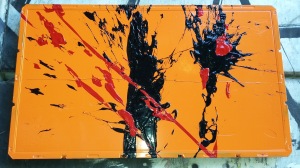 An unknown Brazilian street artist did this rendition of my butt hole.

I knew I was right, but I kept scouring the internet for a diagnosis that told me I was wrong. I wasn’t. It was a hemorrhoid.

Think of it as a silent sentinel sent to see to my suffering; better still, Kheldjoran Outpost whose lone soldier was summoned to ensure my misery.

I knew because I had an older cousin that laughed about the time his best friend had one. I can’t understand why he thought it was funny. This agony was more than I would wish on my worst enemy.

It was late at night when I realized what it was, and there was no place close enough to buy the over the counter medicine that was cheap and effective. That was part of my frustration and anger. I knew how easy it would be to relieve and eventually cure.

I had to spend my night tossing and turning. Trying frantically and unsuccessfully to lie down in a way that didn’t aggravate the giant, bleeding ball of pain and electricity that my butt-hole had been invaded by.

At 8 am, I was the first person at the pharmacy. Clearly, the woman behind the counter could see that I was in pain, she gave me a look generally reserved for patients coming in to fill a powerful prescription for some flesh-eating and ultimately lethal disease.

That’s exactly how I felt.

In less than five minutes I had a tube of Preparation-H that I clutched with more ferocity and greedy desperation than a Benevolent Dictator holds on to power!

I didn’t wait until I got home. I couldn’t!

I drove one block to the nearest gas station, bought a bottle of water that I needed as a pretense to use the bathroom, and because my sweaty, fervent hands wouldn’t cooperate, I nearly dropped everything onto the filthy, muddy, piss filled floor that is the hallmark of every gas station bathroom I have ever avoided as I frantically locked the door behind me.

I stripped from the waist down and unceremoniously crammed as much of that medicine into my ass and surrounding area as could possibly fit.

I didn’t cry out of pain, I had run out of those tears sometime before dawn the night before. I didn’t cry from my suffering. I cried from the relief.

It was the absence of searing pain that was so amazing that for a few brief minutes I simply stood there, in a filthy roadside gas station bathroom, with a butt-load of Preparation-H, struggling not to accidentally step in or touch the blood and filth that missed the toilet, crying tears of joy.