Dr. Neil Turner is a Renaissance Man who has turned his unique talents and skill-set into a master-key that has unlocked far more than most academics and free thinkers can imagine! We dug into his ever-expanding decade-long ethnographic fieldwork in Brazil and, among other things he helped me in my struggle to understand the Racism Vs. Classism debate and debacle that plagues my mind in Brazil. More importantly, he opens up about the other components that fill in his success as a bi-lingual:

The way he breaks down how he explored the country he was interested in is a blueprint for people interested in moving to a new culture!

Other points we go over are his:

Master’s Degree in Medical Anthropology and being an Epidemiologist;

The infrastructure, severe financial issues the country has as well as the economic roller coaster Brazil is on;

Language being a portal to understanding & The Observer/Participant stage;

Amidst an ocean of people commodifying the exploitation of Brazilians, Dr. Turner penned a piece that takes a brilliantly readable, yet fully academic in its portrayal of a particular relationship dynamic.

Originally, Dr. Turner was referred to me by a friend, based on the strength of his writing, Black American Men and Brazilian Women. 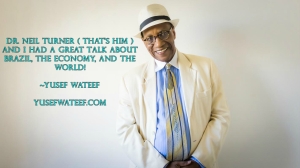 You can pick up the full text here:

About the Author
Neil Turner is an American anthropologist living in Salvador, Brazil with a background in Epidemiology and Biostatistics. He holds an M.A. and Ph.D. in Anthropology. In the USA, he worked as a research analyst for the American College of Physicians and as a computer information technician. As a professor, he has taught at Tufts University, Boston, California State University, Los Angeles, and American Pathways University, Denver. Also, he has authored several essays, papers and lectured. His work in medical anthropology has been published by Grin Publishing, Munich, Germany and the Italian online anthropology journal, Antrocom.